Please note. Depending on the country you choose you will be forwarded to the homepage of the subsidiary. You will find the responsible contact person on the imprint page.

Do you have any questions?

We are ready to help you!
Consultation

Zugspitze: UZIN on the top of Germany 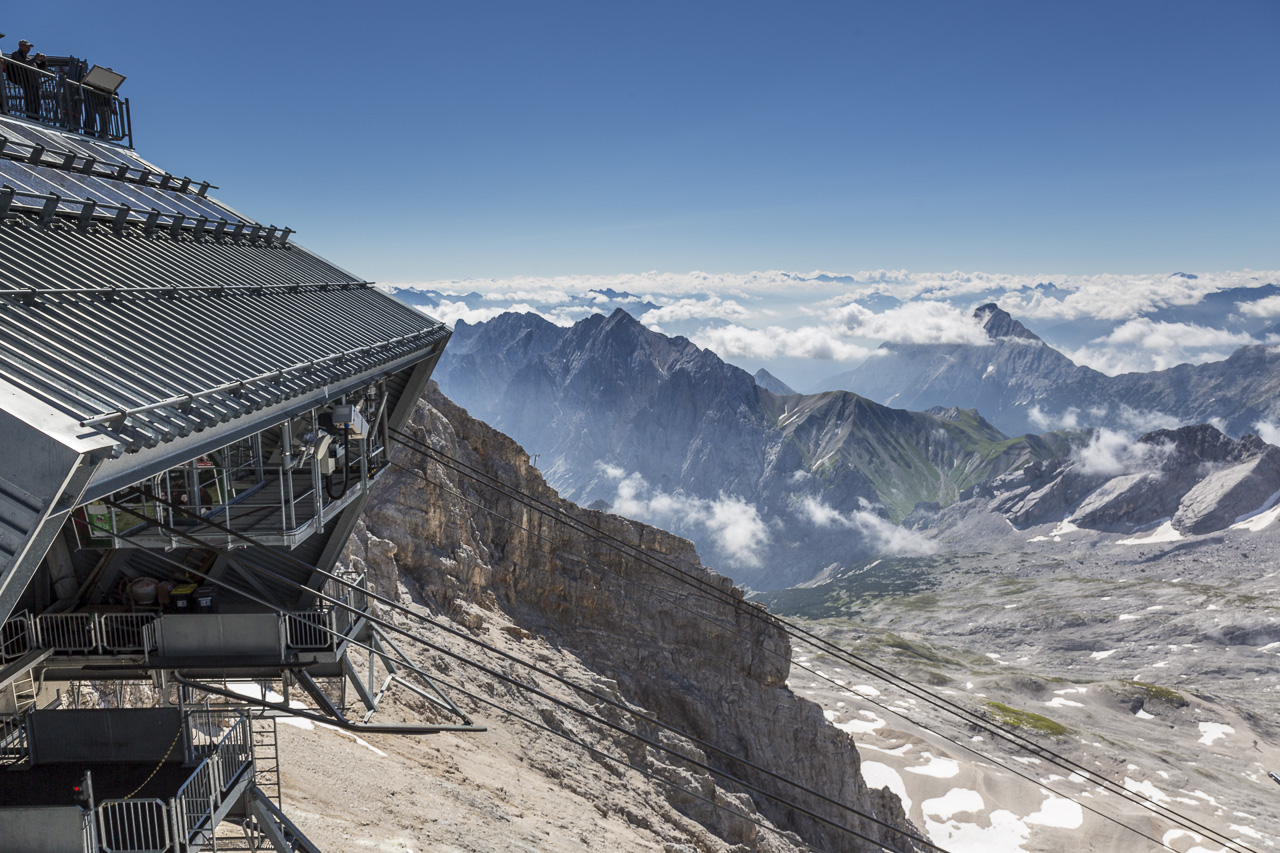 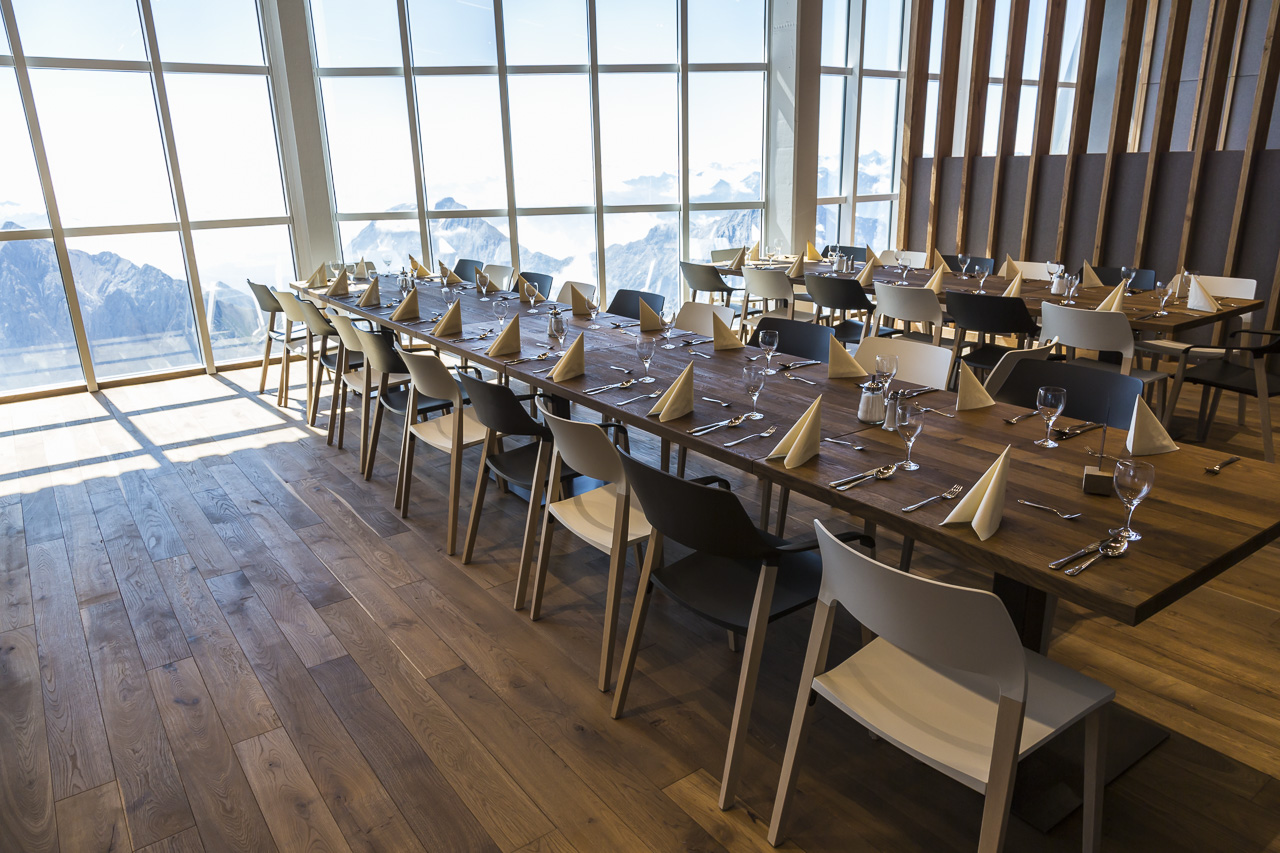 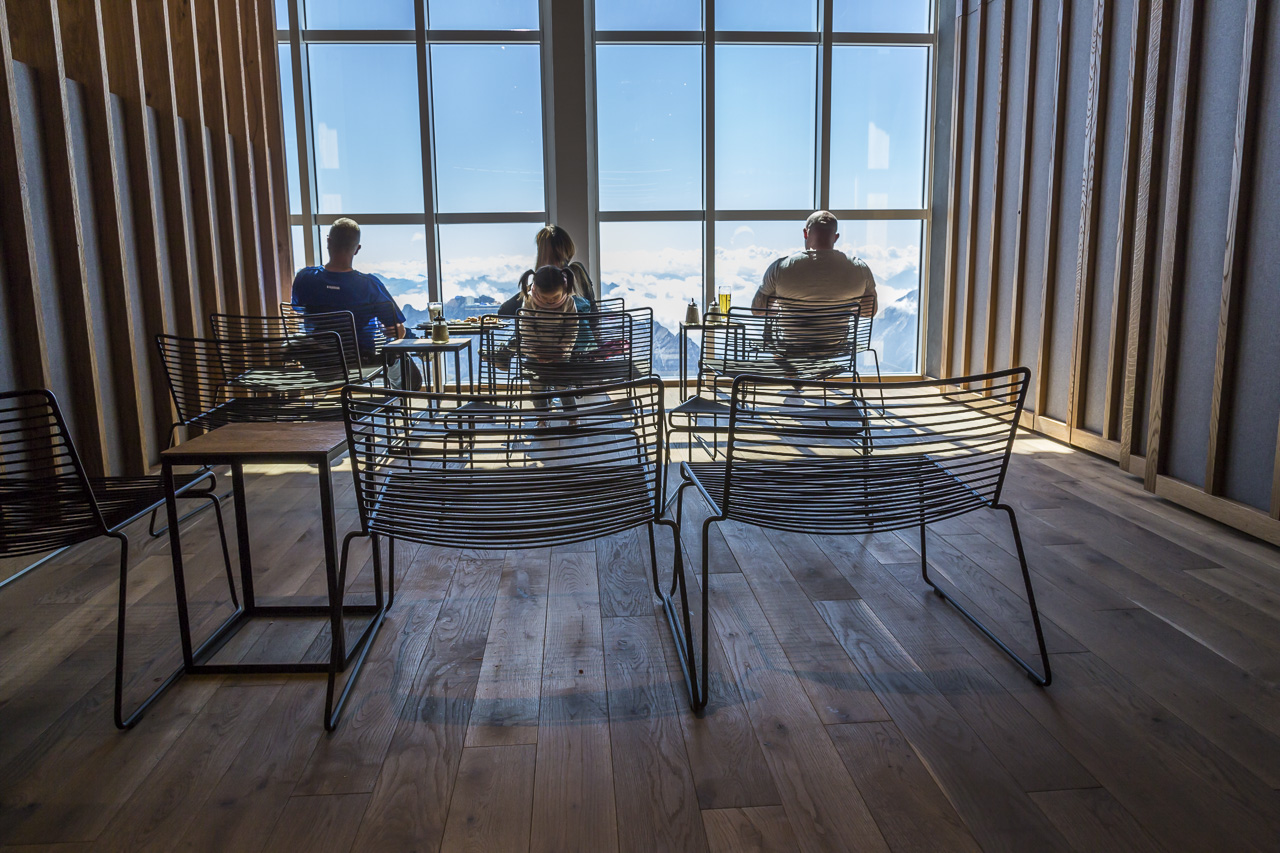 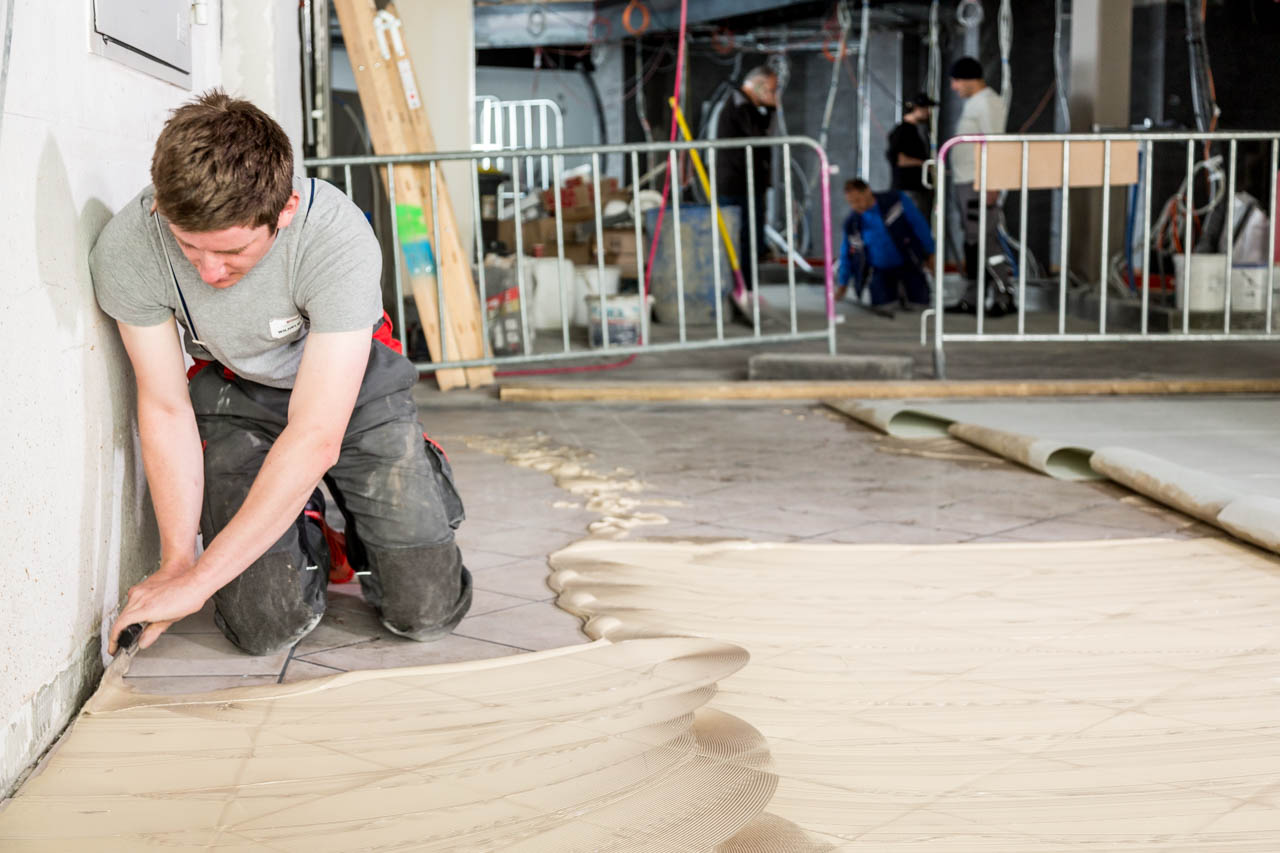 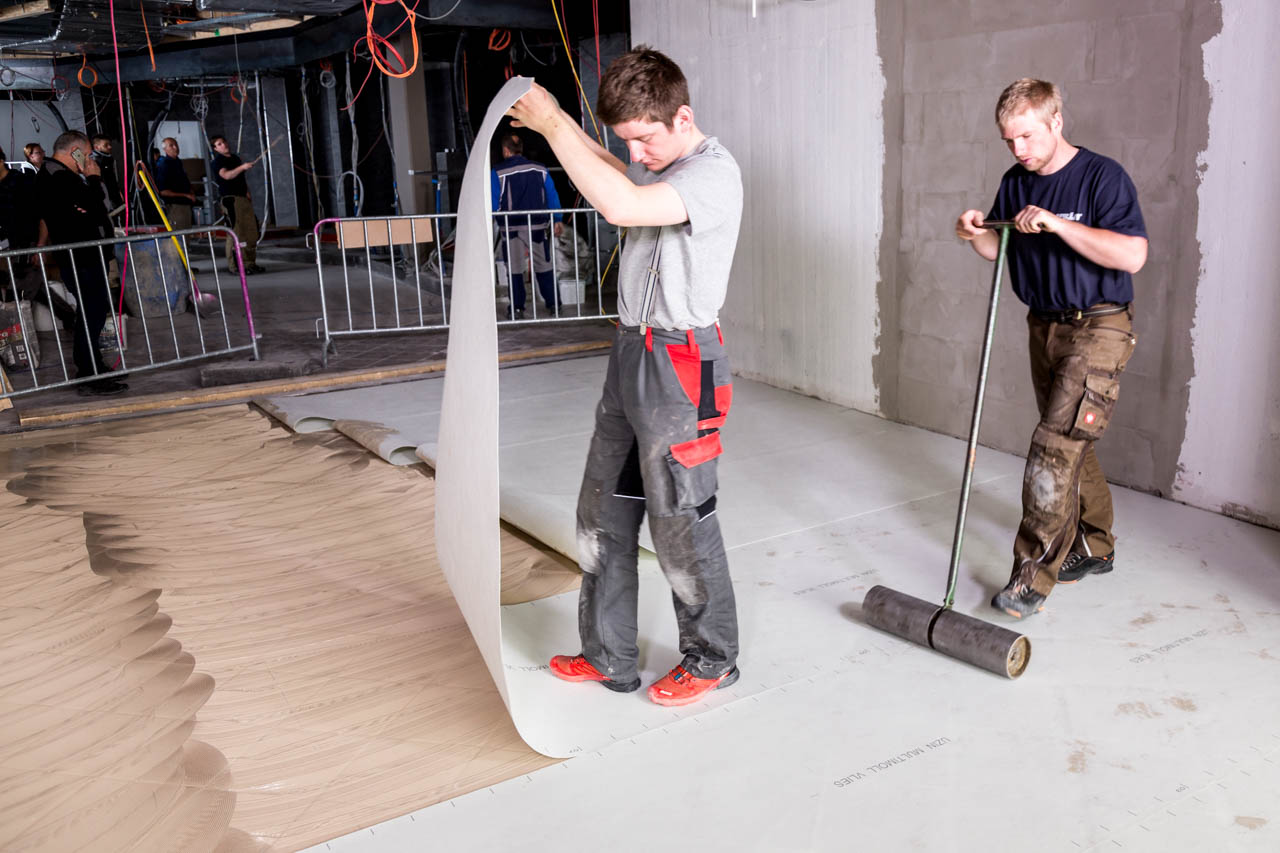 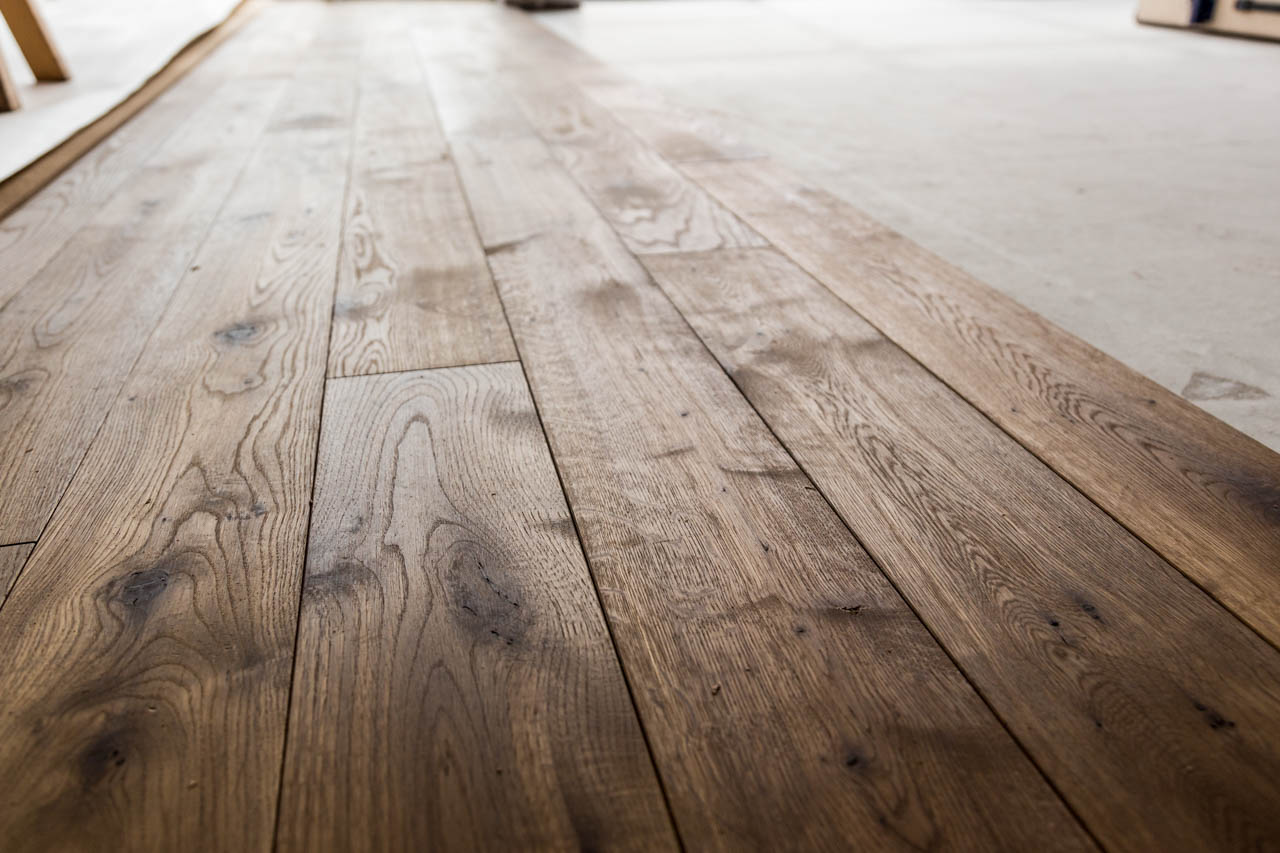 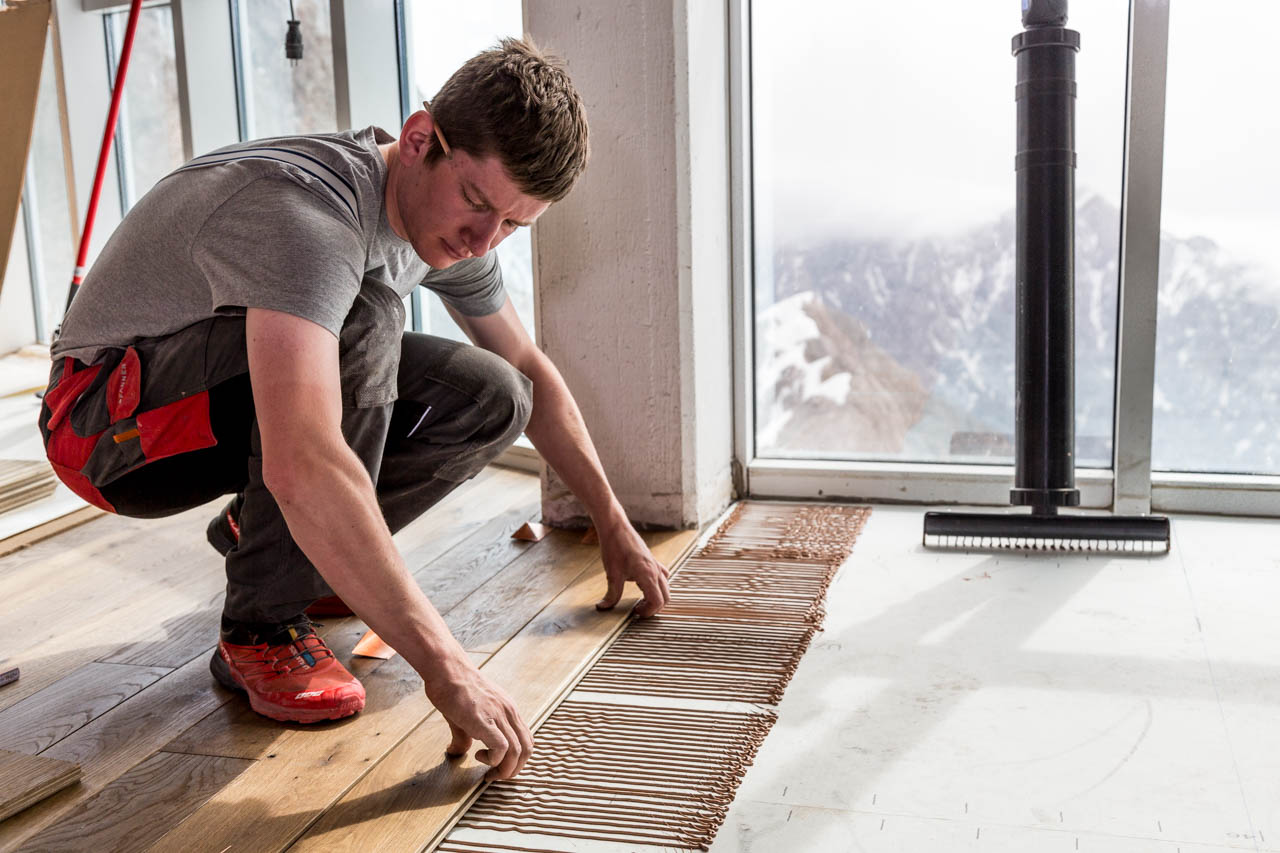 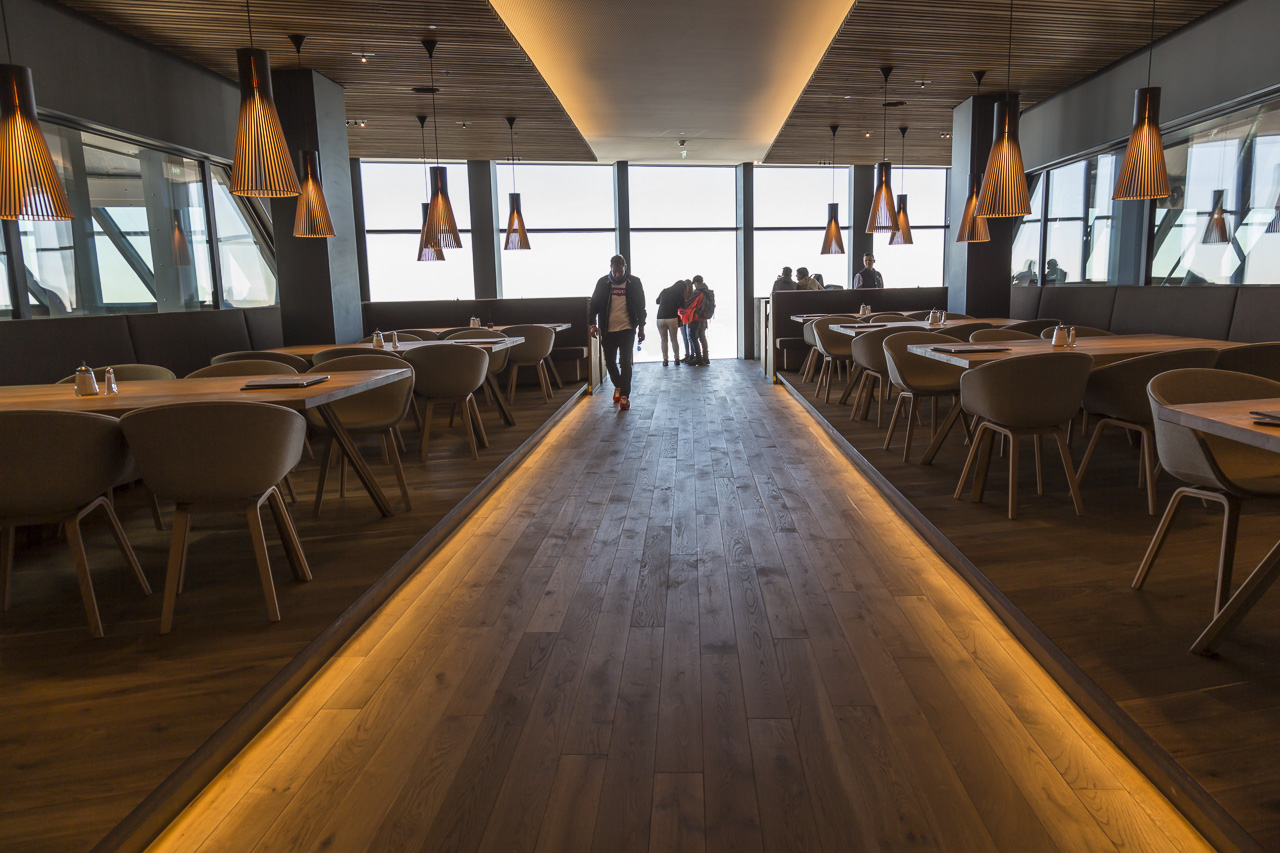 Not everyone can claim they have carried out work at Germany's highest construction site, but the company Kraus from Grainau (Germany) can. Bernhard Kraus and his team have installed 800 m² of solid wood flooring in the renovated Panorama restaurant at the summit station. The challenge was to find a renovation solution under difficult logistical and climatic conditions. Uzin's high-performance installation materials guaranteed a safe and perfect result.

The construction site on Zugspitze was completed in 2018. In addition to the new cable car from Eibsee up to the summit station, the restaurant there has also been updated. "First and foremost, we wanted to improve the quality and avoid long waiting times on busy days for our guests. The new Zugspitze cable car is also technically 'state of the art' and no longer comparable with its predecessor", Matthias Stauch, CEO of Bayerische Zugspitzbahn Bergbahn AG.

The restaurant Panorama 2962 opened its doors to visitors on 1 July 2018. In the past six months, extensive conversion work has been carried out. At an altitude of almost 3,000 m, the multifunctional restaurant presents itself as an architectural feast for the eyes. "Typical specialties from the Alpine region are served, garnished with plenty of panoramic views," reports Steffen Korff, Economic Director of the Bavarian Zugspitzbahn and responsible for the gastronomic concept in Panorama 2962. The new restaurant offers space for a total of 450 guests inside and 850 outside.

Panorama 2962 on the Zugspitze stands for the best views on both a scenic and culinary level. Thanks to wooden ceilings and loden upholstery, this restaurant radiates the necessary cosiness above the clouds, even at peak times. To the east, floor-to-ceiling windows offer a view of the Zugspitz summit, while to the north, bar tables with bar stools invite you to enjoy the view of the foothills of the Alps. From the view of the lake, those interested can also gain great insights into the technology of the Zugspitze cable car.

The view at their feet is also appealing for the visitors. The newly laid, 20 mm thick solid oak planks blend harmoniously into the cosy overall impression of the new summit restaurant. The natural wood flooring visibly enhances the overall impression of the property and gives it a lively warmth and comfortability. The natural surface character and inviting feel underline the style-conscious furnishing.

The construction site presented Bernhard Kraus with three major challenges. On one hand, the installation of solid wood boards at a height of 3,000 m is anything but easy due to the climate. "At such heights, the climatic conditions are completely different from those at the foot of the mountain," says Bernhard Kraus. "The humidity is especially much lower. The wood must therefore acclimatise for several weeks in the surrounding area, otherwise there is a risk that the wood will crack after laying.

“The area of the restaurant was about 800 m², however we were not able to install the entire area at once, only in sections," remembers Bernhard Kraus. "Due to the tight deadline until the opening, several trades were busy on the construction site simultaneously. During our installation, for example, the carpenter installed the elaborate wooden ceiling at the same time. Here all the trades involved had to adhere precisely to the planned construction sequence so that nobody got in each other's way and the work could proceed quickly.

In addition, there were different substrates in the building. "One part of the 800 m² was covered with existing tiles, the other with a newly laid quick cement screed," says Kraus. "You don't have something like that every day." The first step was to check the existing tiles for firm bonding, hollow tiles had to be removed and an intensive diamond cut with grain size 40 had to be carried out. This served to create a non-slip surface. After cleaning the existing surface with the UZIN Basic Cleaner, the work could finally begin.

Kraus first applied the two-component epoxy resin primer Uzin PE 460 to the tiled floor. On one hand, this served to protect the solid floorboards against the effects of the old existing structure, on the other hand, it was also intended to strengthen partly unstable areas. Uzin PE 460 is an epoxy resin primer specially developed for unstable, damp substrates and is suitable, among other things, for blocking moisture from cement screeds and concrete substrates.

The next step was to decouple the tensions of the solid floorboards from the subfloor. The Uzin decoupling system Multimoll fleece was used for this purpose.

The solid oak planks were finally installed directly onto the renovated tiles. The solid planks were glued by the installation team with the 1C wood adhesive Uzin MK 250, which was supplied in a tubular bags. "The Uzin MK 250 is particularly easy to use" reports Bernhard Kraus. "With very good strong adhesion, the best filling capacity and early strength development the adhesive has exactly the right properties a good wood adhesive requires for solid floorboards".

The adhesive was applied by the installers with the Uzin ATD 100 applicator which has a number of advantages. Not only is it easier to apply in an ergonomic standing position, but the packaging waste is reduced by using tubular bags rather than plastic buckets. This was very much a benefit due to the limited logistical possibilities on site, as no empty buckets had to be removed from the construction site.

The experienced team from Kraus succeeded in implementing the installation project at 2,962 meters above sea level with great care and perfection despite the unusual conditions and extreme climatic requirements. The technical advice enabled a tailor-made solution to be found for the project. Premium installation materials guaranteed safe work with the best results. Product related delays were ruled out right from the start despite the difficult external influences at this prestigious project. "We are very satisfied with the result of the Kraus company", reports Steffen Korff. "The team adapted excellently to the conditions on site.

UZIN. THE FLOOR BELONGS TO YOU.
Installation systems for screeds, flooring and wood flooring.

WOLFF. Going beyond your limits.
Machinery and special tools for subfloor preparation and installation of floor coverings.

PALLMANN. For wood floors. For life.
Complete product range for the installation, renovation and maintenance of wood flooring.

floors for change
Resin flooring with passion for design.